I was being portrayed as a picture of health
in the fitness industry, highlighted in the most popular
fitness magazines and workouts, but I was crumbling on
the inside. I felt like a fraud and a prisoner in my
own body, desperate to feel well again.

Early in my professional dance career, I had an accident that resulted in six surgeries over the course of four years. I went from being at the top of my game to wondering if I would ever walk normally again. I had received my nursing degree in college but couldn’t work as an RN because of the physical demands it requires. To get by financially, I started modeling and acting, appearing on All My Children and modeling as a bride and bridesmaid.

My Doctor said I Would "Never Dance Professionally Again"
I was determined that I would dance again and began to heal. After being out for five years I went back to dancing part time and I found a niche in fitness modeling. I also returned to occasional nursing shifts. I was doing my best, but burning the candle at both ends was affecting my stress level and I began to develop poor eating habits. I started to feel unusually tired after meals. Shortly after, my stomach burned frequently and I was nauseated almost every time I ate.

Acid Reflux and an Inflamed Gastrointestinal Tract
I love food – so this was absolutely miserable. To have my health and work compromised again was a nightmare. After an endoscopy, I was diagnosed with acid reflux and an inflamed stomach lining.

The doctors said there were other issues going on as well– but none they could diagnose at that time. I was prescribed Prevacid and given a list of acidic foods to avoid. With the knowledge I had as a Registered Nurse, I wasn’t keen on taking medicine to suppress an issue, so I tossed the prescription in the trash and stopped eating the acidic foods. The burning went away but the fatigue, nausea and vomiting persisted. I was torn between my traditional medical knowledge and the holistic treatments I began to explore.

A Prisoner in My Own Body
Despite my efforts, my weight was fluctuating like crazy, I was losing muscle, my joints were hurting, and I was taking more naps than a toddler. Ironically, I was being portrayed as a picture of health in the fitness industry, highlighted in the most popular fitness magazines and workouts, but I was crumbling on the inside. I felt like a fraud and a prisoner in my own body desperate to feel well again.

I was a bit skeptical since I had already
tried SO MANY things with little success... 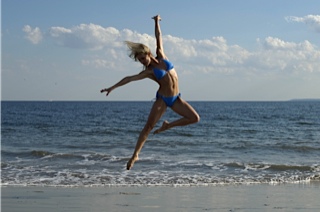 One afternoon while on a fitness shoot, I could barely make it through the day and went to Longevity Health in NewYork City for a treatment with Dr. Margolin. I completely broke down and explained everything I’d been going through with my digestion, as well as all my efforts to treat the problem. I had tried everything from allergy testing to supplements, shakes, herbs, gluten free, dairy free, and yeast free diets.

At that point, he referred me to Burn & Build Body products and suggested I try the Optimal Healing Formula. This vegan protein shake supports the stomach lining and detoxes the kidney and liver. It sounded like exactly what I needed, but I was a bit skeptical since I had already tried SO MANY things with little success.

Healing From The Inside
For a month I ate from the Burn & Build Body guidelines, drank two Optimal Healing Formula shakes a day made with water or almond milk and eliminated dairy, gluten and consumed a minimal amount of meat. Within 3-4 weeks I felt amazing. It actually felt good to eat again. My energy level improved dramatically, I put some healthy weight and muscle back on, my joints stopped aching. I felt like I had control of my health again. I stayed with that regimen for about two months and then transitioned to one shake in the morning or as a meal replacement with fruit. My calorie needs were met and I was healing from the inside out.

As much as I would never want to go through
it again, I’m grateful for the entire experience.

My Maintenance Support Formula
I want to share the combination of supplements I'm now using to maintain my new health and re-build my body. I'm happy that this combination is so supportive without having prescription side effects.

Living with Gratitude
Rockit Fuel has completely replaced my favorite high-caffeine latte and I'm loving not having a caffeine spike and crash anymore. Rick a co-founder of Burn & Build Body has been incredibly supportive in guiding me along this journey. As much as I would never want to go through it again, I’m grateful for the entire experience.

New Wisdom and a New Outlook
From painful struggles to success, Burn & Build Body has changed my outlook about food and nutrition. I didn't think I would be able to heal without unpleasant side effects on my body. Now, because I'm a RN – and work in the fitness and entertainment industries, people have a tendency to come to me for health advice. It’s nice to know I’m better informed... and have my own personal healing success story.

Marisa Merliss is a professional dancer, model, fitness personality and pediatric registered nurse residing in NYC. She has been featured in popular fitness publications and media around the world including Women’s Health Magazine, Runners World, Japan/Hong Kong Elle, Beachbody (Brazil Butt Lift, Hip Hop Abs, Slim in 6, Turbo Jam, Rev Abs, Asylum) and many more. These experiences have afforded her the opportunity to work with some of the top fitness professionals in the world. She is certified in the BodyArt Exercise Method, www.bodyartschool.com and is a NASM Certified Personal Trainer. She is currently teaching BodyArt Conditioning at Body and Pole Studio www.bodyandpole.com, while working on upcoming fitness projects.

Along with being a dancer/actor, Marisa is also a former national baton twirling champion. She has appeared in Theatre, TV and Commercials, most recently in the Off-Broadway Variety Show “Broadway Varietease” and portraying the famous fan dancer Sally Rand on “Mysteries at the Museum” on the Travel Channel. She is grateful to keep a foot in the door with nursing, working per diem at NY Presbyterian-Cornell Hospital in Pediatrics and serving on international medical missions with Operations Smile.

With her extensive background and personal health journey, Marisa is passionate about teaching proper body mechanics and preventative care. She is eager to deepen her knowledge in the hopes of helping more people live happy healthier lives from the inside out. www.marisamerliss.com